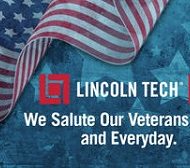 Lincoln Educational Services Corporation (NASDAQ: LINC), founded in Newark, NJ as a premier destination for hands-on career training, is celebrating its 75th anniversary in 2021. Hundreds of thousands of students from across the country have graduated from Lincoln Tech schools during that time, including thousands of veterans of the U.S. Armed Forces. Assisting servicemen, servicewomen, and their families remain at the core of Lincoln’s mission just as they have since the school’s founding in 1946.

The original Lincoln campus opened in Newark, NJ to serve veterans returning home at the end of World War II. The school was designed to help veterans translate the skills built in the military into hands-on career skills, initially for the heating and refrigeration industries, adding automotive career training shortly thereafter. Founder J. Warren Davies wanted to provide training that would help these heroes transition back into civilian life after honorably serving the nation overseas.

“We consider it to be the highest honor as educators to be able to assist our servicemen and women who have sacrificed so much in service to our country,” says Scott Shaw, Lincoln Tech’s President and CEO. “We’re proud to have served so many over the last 75 years. Because we have many veterans on our staff and faculties, we understand the unique challenges faced by, and opportunities available to, veterans entering today’s job market. We will continue to train, support, and advocate for our nation’s veterans as we enter the next chapter of Lincoln Tech’s story.”

Throughout the year, Lincoln schools have marked the organization’s 75th anniversary with a series of on-campus celebrations, including readings of proclamations issued by numerous governors from across the country. Campuses were also visited by state and local political figures, long-time employer partners and many others.

“Our 75-year tradition of career training excellence marks Lincoln Tech as one of the most established, successful vocation networks in America,” Shaw says. “We’ve been grateful to all who came out in support of our campuses this year, and especially thankful that hundreds of thousands of students have chosen Lincoln Tech to help them achieve their education and career goals.”

Through visits and proclamations, dignitaries cited Lincoln’s years of service and commitment to the local communities, to student success, and to the support of local employers.

“Local administrators and state legislators were eager to show their support of our milestone accomplishment,” says Frank Galindo, Lincoln Tech’s AVP of Public Relations and Stakeholder Engagement. “Through their citations, proclamations, and letters recognizing our efforts, they made it clear that our presence in their states, districts, and cities has helped spur job creation and economic growth. We look forward to proudly continuing that tradition of support and service no matter what the economic climate, because we believe that with a quality vocational education and the accompanying skills, everyone can grab their piece of the American Dream – whatever that dream looks like to them.”

With more than 2 million jobs projected to become available by 2030 in fields for which students can train at Lincoln Tech, and with expected federal investments in infrastructure, job training and employment opportunities, campuses across the country are projected to play major roles in helping develop the workforce. Industries such as Automotive and Diesel Technology, Healthcare, Information Technology, Culinary and Cosmetology are all supported by Lincoln Tech schools, as are skilled trades such as Electrical, Welding, Computerized Manufacturing, and HVAC.

For more information, go to lincolntech.edu.